Cardano Community
A video to show some of the history of ADA North Pool from 2018-2022 and for delegators to understand what are the pools contributions and passions.

Research papers
A short (less than half hour) look at Permissionless Clock Synchronization with public setup from the IOHK library of research papers.

Research papers
A short (less than half hour) look at IOHK`s research paper: PEReDi: Privacy-Enhanced, Regulated and Distributed Central Bank Digital Currencies. I do not go into all the details but try to lift the discussion to how CBDC can be a force of good and enhance privacy while also try to have a bit critical eye on the implementations and standards we should choose for such a technology implementation. Keep in mind I am not a domain experts on CBDC's and the technology behind it and this is my current understanding after reading the reseach paper twice. I welcome any corrections, and this video intent is to showcase how CBDC can also be someting positive when it comes to preserving privacy.

A first look at the Ofelimos research paper

Research papers
In this video I make a first look at Ofelimos (https://iohk.io/en/research/library/p...) a wonderfull research paper that paves a way for PoW blockchains such as Bitcoin to expend computational resources and energy for usefull work. Heads up I get the ranking blocks wrong in the start of the video and correct myself during the latter parts. Honestly I have read the article two times so far and I keep learning new things so this is not an easy article to discuss for me, but I think it is a usefull practice to work on the understanding of such a powerfull idea that Ofelimos proposes.

Research papers
Short introduction to Mithril reseach paper as well as how to set up network. https://mithril.network

World Mobile let's go part 3 was made to show some of the amazing achivements and the community around World Mobile.

Cardano Projects
World Mobile -More than words was made to show some of the progress that has been made and how it could impact the lives of everyday people like you and me.

Catalyst series book of why and radical markets

Cardano Governance
Another two books (book of why and radical markets) looked at for some key points in regards to catalyst treasury voting processes.

Cardano Governance
A short video on two books I find relevant for the Catalyst treasury project.
Next

In honor of Cardano on the rocks

In this medium guide I describe how to run cardano-node on a Rock Pi 5b, a device you can hold in your hand and that draws less than 5 watt during operations with Cardano-node and that can handle the billions of value of transactions flowing through the Cardano blockchain. This showcases just how energy efficient and decentralized Cardano can be. https://adanorthpool.medium.com/in-honor-of-cardano-on-the-rocks-25489797031d
https://adanorthpool.medium.com/in-honor-of-cardano-on-the-rocks-25489797031d

This is a continuation of the previous article Virtual Cardano. Guide on setting up Cardano relay node on a Proxmox Virtual machine.
https://adanorthpool.medium.com/virtual-cardano-part-2-guide-on-adding-peers-to-topology-and-further-monitoring-of-relay-ea5a5d0cb5cd

This is a continuation of my series on Proxmox that started with Virtualization and optimization for node operations with example of practical use. In this guide we will set up a Cardano Relay with monitoring.
https://adanorthpool.medium.com/virtual-cardano-guide-on-setting-up-cardano-relay-node-on-a-proxmox-virtual-machine-7e0a2109a50a

Virtualization and optimization for node operations with example of pratical use.

Proxmox is a virtual environment where you have a host Debian distro running virtual machines on top of it. This article wont go into all the details of this but focus on optimization and tricks learned for node operations such as on the Cardano network or in the future World Mobile network.
https://adanorthpool.medium.com/virtualization-and-optimization-for-node-operations-with-example-of-pratical-use-513ec3bbdd55

Server hardening and optimization for the would be node operator

In this article we will look at some measures you can do to harden your Ubuntu server from attacks.
https://adanorthpool.medium.com/server-harderning-and-optimization-for-the-would-be-node-operator-93242fd259dd

Proof of stake , a small guide on securing login with Secure Shell (SSH)

In this guide we will look at some aspects of securing login with Secure shell (SSH)
https://adanorthpool.medium.com/proof-of-stake-a-small-guide-on-securing-login-with-secure-shell-ssh-1110772ddcb6
Tweets by adanorthpool

Values of the staking pool

That means we have an high emphasize on being transparent such as when something fails such as the day the web server had a disruption. We would also publically announce if we failed to produce any blocks due to hardware or downtime issues.

The no pool splitting principle

As part of NBX we have a fiancial responsibility to be profitable for the company, however we align with the IOHK guidelines and will not split pools unless we have a high leverage on our current pool. We are much more likely to open a private pool if it came to that than to spam multiple public pools with low leverage and that would be the way to align with the Cardano single pool alliance we are members of and in the past we closed the second pool in 2020. Our main guiding light is that we will not to anything that is harmefull to the overall security of the Cardano network and will strive to help secure the network.

As a pool run by head of staking at NBX.com we will strive to be competitive and have allready offered additional rewards on top of the rewards given by the protocol such as the WMT token promo. Given the high uptime and good performance overall we believe this to be a competitive offering in the market that will only get better the more is delegated to the staking pool.

As a full time head of staking operation I (Eystein Hansen) now have better time for the Cardano ecosystem and have started the process of adding content such as our video guides and improving our learning center.

Pledge as much as you are able to

We have recently increased our pledge and will be trying to maximize the pledge factor for our delegators benefit.

Apart from the guiding principles from IOHK, I am personally focused on the decentralization aspects of Cardano as well as being part of the Goverance of the ecosystem. In short NBX and ANP is in it to help further the network and believe it is in our best interest to promote and work as much as we can with the Cardano ecosystem.

Part of the Cardano guild operators since 2019, The Cardano Single Pool Alliance since 2020 as well as part of forming the Inter Stake Pool Peering Agreement 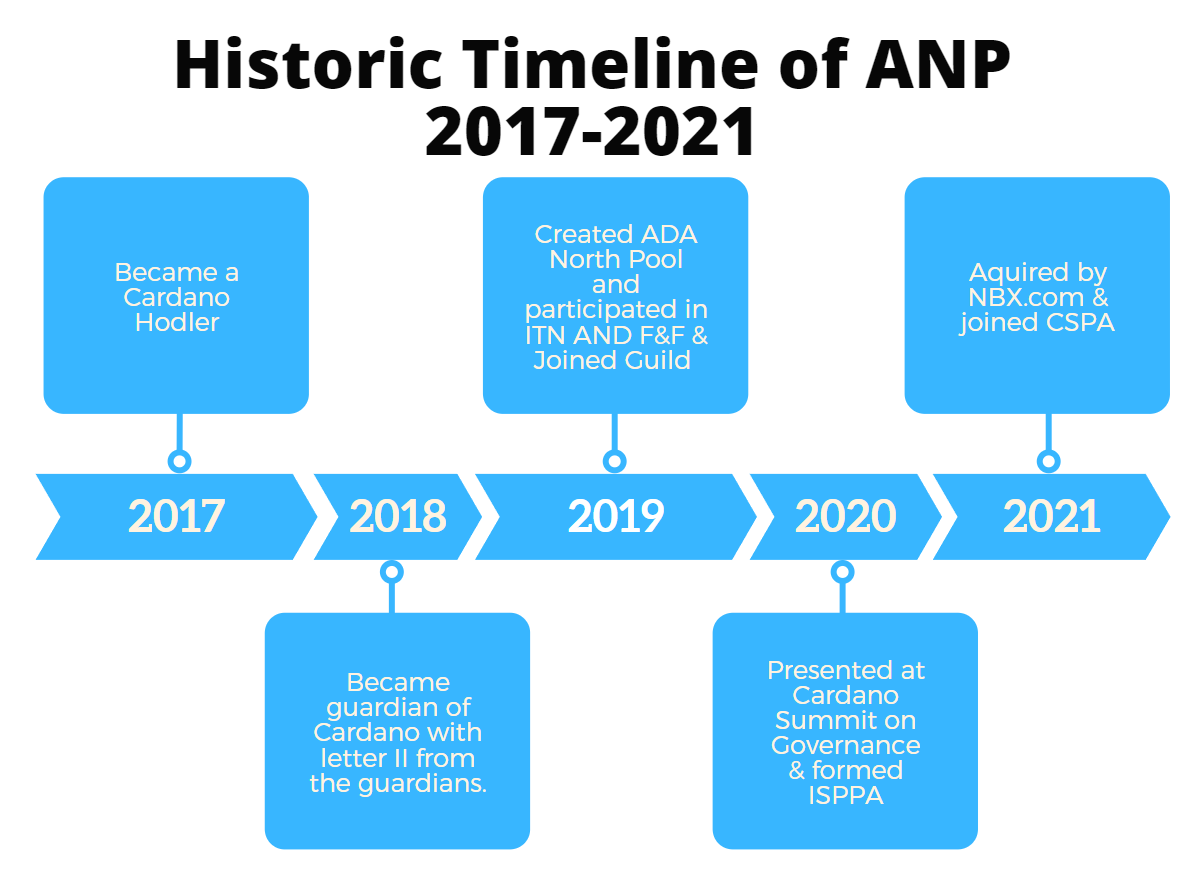 My experience with the Cardano ecosystem started back in December 2017 and my first post on the official Cardano forums in January of 2018. At the time with my background in Psychology and Law I participated in discussions on goverance and on topics of decentralization.

I wanted to participate in Proof of Stake for Cardano because I believe in decentralisation and especially that we need to have all kinds of hardware and geographical locations for Cardano to be truly decentralised. At the time some of my work where on an idea for decentralised remittance through family members to avoid banking requirements, as well as discussing how to encode law in a decentralised domain.

The year started with charity events through Kiva where I was part of the Cardano Kiva lending team. I created the telegram group of ADA North Pool in February. In March I was part of the group of staking pools that formed ISPPA or the Inter Stake Pool Peering Agreement. In March I used data resources I had together with the Cardano community for [email protected] covid19 research. I also was a patreon of Pooltool.io that went on to become a staple in the Cardano ecosystem. I attended two more episodes of the Cardano Effect as well episode 68 and 100. I made a few tutorial videoes on the F&F testnet in this time period as well as a video on why ANP was not your average pool operator.

In this time period ANP scaled up its hardware a lot and made a video on the new hardware for the servers. A historic moment was making the first block on the mainnet for the pool during the first epoch pools could do such in epoch 211, ADA North Pool was probably the northern most pool making a block for the first time on mainnet in the history of Cardano.

ANP also held a security contest and gave away 500 ADA to a user for his white hat efforts. The highlight of 2020 was attending the Cardano Summit where I presented on how to do better as a community and ecosystem and on governance issues in “Let’s do better – collaborative mechanisms in the ecosystem“. Finally we also deciced to close down our second pool and became a single pool operator and joining CSPA (Cardano Single Pool Alliance). I also became a Cardano Ambassador in this time period.

In 2021 we started the year by supporting Ergo a cryptocurrency with many ties to Cardano. In the summer Ada North Pool and its delegators donated 25000 NOK to charity from income of the pool to a topic dear to me personally as my son had attended the childrens hospital we donated founds to for toys for the autistic kids there. We also started supporting World Mobile A project where ANP aims to be an Earth node provider for. In this time period we also made a progress report on how far the pool had come in the 2020-2021 time period. In November 2021 the pool was aquired by NBX.com a Norwegian based cryptocurrency exchange and I joined as the head of staking operations at NBX. In December 2021 NBX and ANP announced a charity event where all income for the month would go to a Norwegian childrens hospital charity event. We also attended multiple Norwegian youtube streams discussing Cardano and the Cardano ecosystem during this time period. I started my work as a catalyst advisor for the treasury goverance of Cardano in this time period as well.

In 2022 I became a Plutus cohort learning the programming language for Cardano smart contracts. NBX also announced we had donated 33300 NOK to the children hospital charity event. In this time period I was active as an catalyst member both as an advisor and later as a veteran advisor. I attended the Atala Prism courses for decentralized digital identity solutions and finished this during the early months of 2022. Hardware wise I added a timeserver to the servers so to improve latency drastically. And the history so far ends with a valentines – on February 14th we announced that ANP and NBX loved the World Mobiel project and would give extra World Mobile Tokens as rewards for delegators of ANP.

By clicking “Accept”, you agree to the storing of cookies on your device to enhance site navigation, analyze site usage, and assist in our marketing efforts. View our Privacy Policy for more information.